When we think about moroccan cuisine, I think our minds go directly to the most common type of food that we have heard of, namely Tagines. However, moroccan food has so much to offer than just this!

Meat in all its glory (sorry vegetarians!).  SO many spices and aromas! All of this looked yum and so had to be tried!!!

Our chef of course obliged! After asking for something other than tagine that was moroccan, he pointed the moroccan pizza out. Now of course we know that this isn’t authentic, however the thought of eating a 1/2m pizza with so many toppings, how could we say no?? The pizza itself had lamb, cottage cheese, seafood, and chicken (plus three olives), all on different sections of the pizza. Our verdict: YUMMY!!!

Where is this: Al Mazar Shopping Mall,

But of course Tagines can’t be forgotten either!   From left to right in the photo above; cous cous with chicken and vegetables with a tomato broth, baked egg tagine, lamb tagine with prunes and almonds and chicken with vegetable tagine.

Contrary to popular belief, tagine is a dish named after the dish it is made in, rather than a dish itself. Therefore as you can see above there are a lot of different types of tagines that can be tried. However, we found that the majority of restaurants had the same 7 or 8  “authentic moroccan” dishes. 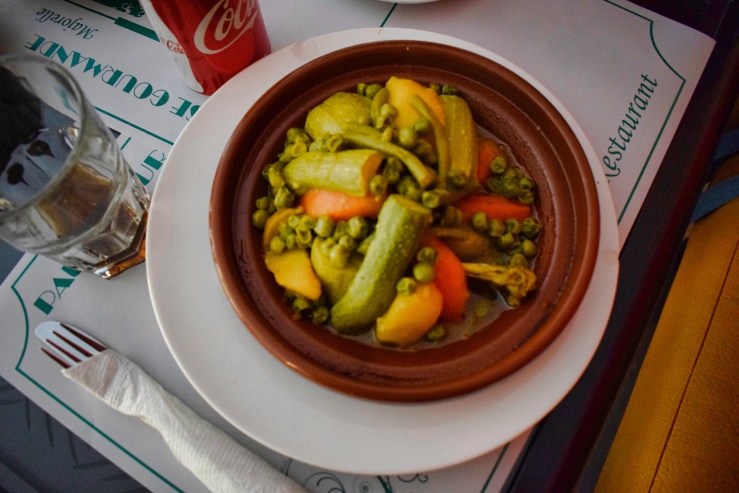 My favourite was the chicken with vegetables. The chicken was lush and easy to eat off the bone, and the flavour was definitely preserved. 100% satisfied!

This soup we were lucky enough to get in our hotel itself. However, it is a very important soup. Made of tomato, lentils and chickpeas, in Morocco it is usually served to break fast after ramadan. It is eaten with dates, warm milk and other moroccan delicacies. It is a rich soup very filling and filled with spices.

Traditional moroccan deserts are usually fruits, however we managed to find some almond nutty desserts. Not our favourite type of dessert but definitely one to try!

Luckily a fruit cart is never too far…

Not  far from Marrakech is the Atlas Mountains, where the berber people live. The fruit of the organ tree can be used to make cosmetics or to make food. When used for cooking, for peanut butter, honey or argan oil which can be dipped into bread and eaten with that.

Bread is traditionally considered sacred in Morocco and is never thrown away. If it falls on the floor it needs to be picked up and kissed, to bless it. The bread itself is absolutely delicious! Traditionally food is quite thick, and bread is used as a means of cutlery. Centuries later, they have perfected their loaves, and now it is soft and delicious. A double yum from us! 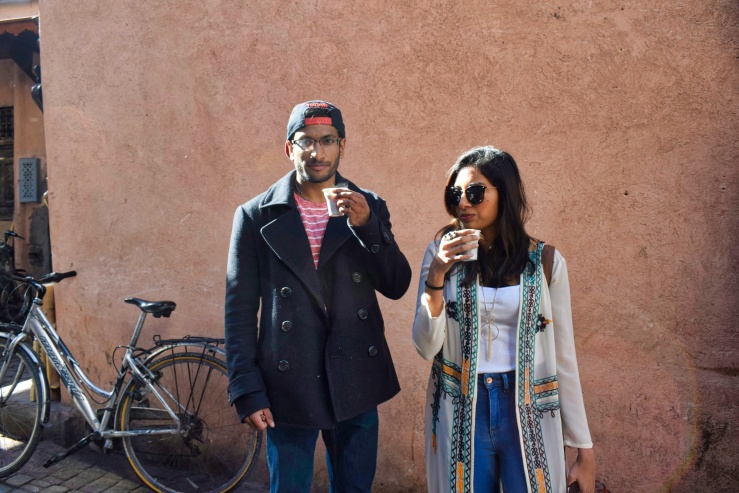 Although coffee isn’t a traditional staple of Morocco, we found a street vendor and had to try some spiced coffee. It was lovely (and only 20p!).

Just about any restaurant you go to, you will find moroccan mint tea. Made from fresh mint leaves, it is the national drink of Morocco. It is usually drunk in small glasses informally, however surprisngly has a sacred tea ceremony which is often used before important political events.  However, more commonly it is used as a way to greet guests when welcoming them into your house. We didn’t get a chance to witness a tea ceremony this time, but is on our bucket list for the next time we visit Morocco.

In just four days, we tried out quite a bit of food and drink! Different parts of Morocco have different styles and specialities! So if you’ve been to any of these areas, please feel free to comment and let me know what you think!